Surely you know from maddening experience that more than a few websites and applications are consciously, methodically, diabolically designed to trick you into doing things you don’t want to do. Now there’s a website where you can learn all about such “dark patterns,” conceived and managed by Harry Brignull, a UK-based UX designer with a Ph.D in cognitive science. 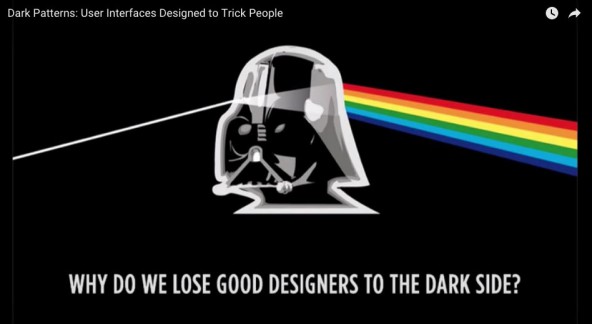 If you get an error message like that and go blank with frustration and disinterest, you’re like me. You may know what “HTTP” stands for and kinda what it does, but hey, you’re trying to get work done with other humans, not respond to a computer application that talks a computer programmer’s preferred lingo. So you’re stuck, or at least delayed until you figure out what that message means or can ask someone who does. More to the point I want to make here: I got that message while trying to upload an image to a WordPress post – see below (red box, upper left): 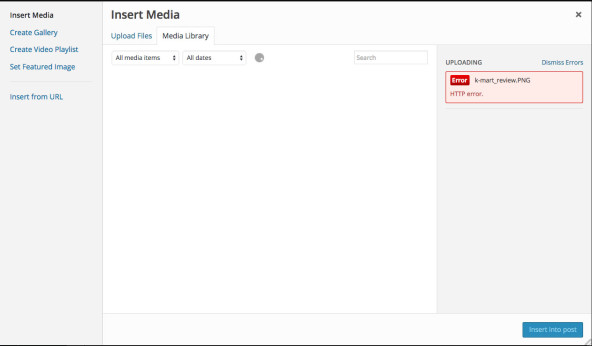 Since starting to work with WordPress a few years ago I’ve learned the hard way that it’s definitely not for anyone with no affinity for, or basic knowledge of, computers and networks and how they work; and it’s probably not for anyone who isn’t familiar with basic HTML. It’s the love child of countless programmers and still dominated by them, so when you get a message like “HTTP error” it’s them basically, blithely saying (between the lines): “most of us here in the WordPress community are pretty geeky and know what that means and don’t mind dealing with it.” Which reminds me of one of my favorite books, a classic, about human interaction with technology, The Inmates Are Running the Asylum, by Alan Cooper. I highly recommend it to anyone who almost didn’t read this post when they saw the headline. Here’s from an editorial review of “Inmates” on Amazon.com:

The recurring metaphor in The Inmates are Running the Asylum is that of the dancing bear–the circus bear that shuffles clumsily for the amusement of the audience. Such bears, says author Alan Cooper, don’t dance well, as everyone at the circus can see. What amazes the crowd is that the bear dances at all. Cooper argues that technology (video recorders, car alarms, most software applications for personal computers) consists largely of dancing bears–pieces that work, but not at all well. He goes on to say that this is more often than not the fault of poorly designed user interfaces, and he makes a good argument that way too many devices (perhaps as a result of the designers’ subconscious wish to bully the people who tormented them as children) ask too much of their users. Too many systems (like famously frustrating VCR controls) make their users feel stupid when they can’t get the job done. 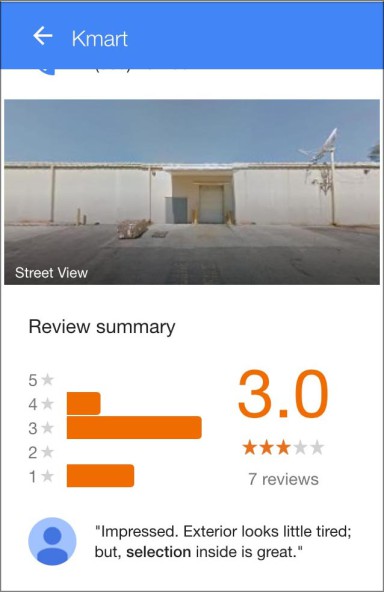 I’ve seen it so often in the past, and am seeing it again now working with a Keys business owner trying to redesign his own website: most folks don’t realize how incredibly useful and valuable it can be to think hard about who your site visitors are, carefully analyze their content needs, and clearly visualize how you want them to interact with your site (the navigation) BEFORE you design how the site will look (page lay-outs, colors, fonts, etc.). Unless you follow at least a few basic sequential steps and produce at least a few basic planning and design documents (content inventory, sitemap, wireframes, etc.)–even just simple pencil sketches and diagrams–you can easily find yourself going around in frustrating circles and wasting a lot of time and money as words and images and links and pages all mill about in your mind like a school of feeding fish. Here’s my favorite cartoon on the subject: 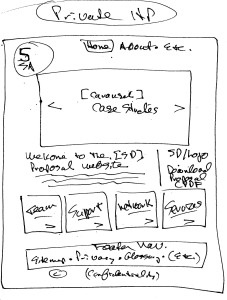 You call company x, get put on hold, condemned to listen to garbled, distorted muzak in a loop that cuts in and out, like a bad radio signal. You try not to memorize it but eventually you do, so now you’re a brainwashing victim. You try putting it on speaker but it continues to crackle and babble idiotically, interrupting itself only to assure you that “Your call is important to us.” You hang up when you catch yourself thinking maybe it would be instructive to measure the time interval between “Your call is important to us” messages.

That phone user experience is standard practice for most companies, including big Fortune 500 ones–and it’s REALLY ANNOYING, right? So why does it take a Miami used car dealer to come up with a solution? When Haims Motors (Hollywood, FL), puts you on hold, you get an initial dose of muzak, but then a voice comes on and gives you four choices: 1) “Change the music selection” [no, thanks], (2) “Leave voicemail” [useful option!], (3) “Stop the music” (YEAH!) or (4) “Transfer to an operator.”

Seems so simple, doesn’t it? Okay, so we’re talking about phone here, but there are SO many bad user experiences with easy fixes out there on the Web–and nobody ever gets around to fixing them! (Having worked for a Fortune 500 for several years, I think I know why, but that’s a whole ‘nuther story…). 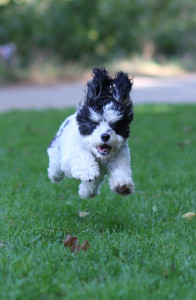 … and I keep clicking the box to the left of the item description because that’s usually where you SELECT things laid out in rows online before taking the next step – ordering, managing, archiving… whatever – and my shopping cart keeps emptying out!  I try clicking through a few more times before noticing that the checkbox  is actually labeled “Remove.” 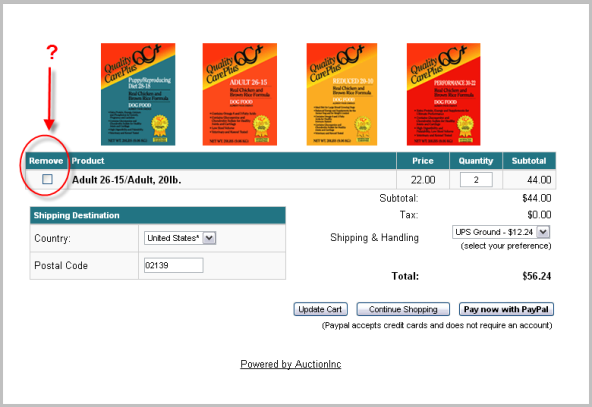 So you come to this screen after clicking “Order” on the previous screen and your first (top row, left) option is to change your mind and NOT order?!? Not good for business!  Not good for the user experience–not how most user interfaces are designed! Usually a checkbox in that position is for selecting something, choosing to act on it, preparing to take the next step in the interaction flow–then maybe later clicking again to de-select it.

So that  layout tripped me up, cost me time, made me a tad irritated with QC+,  a product I’ve been buying for almost 20 years  (I’m a proverbial “loyal customer”; don’t bug me!).

My point being… design interfaces as much as possible with familiar lay-outs–Web design “conventions”– so users in a hurry don’t have to stop and figure out anything new – they (we) simply don’t have the time and patience for that!  (Which doesn’t mean, of course, that if a design convention really doesn’t work in a particular context  it should be applied willy-nilly… but you should  have a pretty strong, clear reason for ignoring it–preferably confirmed with user testing.)

Just came across this in Luke Wroblewski’s “Mobile First,” a handy little Book Apart booklet on how mobile is the new standard we all need to design for—Nokia user experience (UX) designer Rachel Hinman saying the desktop experience is like scuba diving and mobile is like snorkeling’s “partial attention and interruption.” 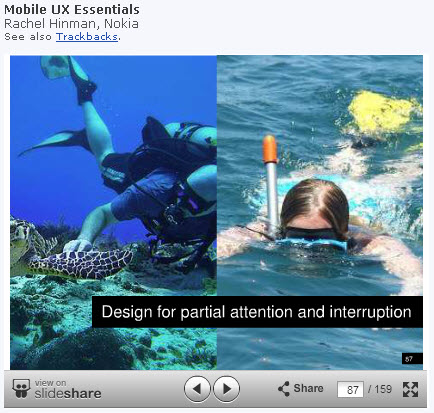 I disagree with her about snorkeling! I’ve had some of the most full-attention, uninterrupted, sublime encounters I’ve ever had with any sea creature while snorkeling (I’m thinking about a young hawksbill turtle I followed along the shoreline in less than 10 feet of water at the southern tip of Basse-Terre, Guadeloupe for more than 20 minutes last July…). Snorkeling lets you float silently (no bubbles), motionless, on the surface and watch marine life going about their business below you, thinking you’re flotsam—nothing threatening, no worries (you just need to avoid flapping your flippers on the surface, snorting through your snorkel, any sudden movements)

Marketing and sales seer David Meerman Scott (“The New Rules of Marketing & PR”) recently had an ‘aha’ moment while watching the Vans World Cup of Surfing in Hawaii: I was surprised by how low key this important competition looked to me while there in person. I knew it was a big money event and had… Read more »