Back at the turn of the century, when the Web was young, not long after Louis Rosenfeld and Peter Morville’s “Information Architecture for the World Wide Web” (aka “The Polar Bear Book”) was published and information architecture (IA) began to make a name for itself, I spent a lot of time (probably too much time) on an listserv hosted by The American Society of Information Science. It was devoted to (you guessed it) IA, and by far the longest-running, hottest, most thrilling, frustrating, addictive thread was called “Defining the Damn Thing” (IA). Even with all the debate, even back then, thanks again largely to “The Polar Bear book,” most of us who called ourselves IAs were well aware of how important it was to pay close attention to content while designing and building websites.

Fast forward about a decade and I’m four years into a job as “Web writer” that required me to do a lot of IA without actually calling it that, and I get a call from a Web design agency that wanted to talk to me about a “Content Strategist” job. Though I’d never heard of that job title it sounded like just what I was doing, so I poked around and found some new books about “content strategy” and a lot of online debate about what “content strategy” was and had another “defining the damn thing” moment and déjà vu all over again. By 2010 I was working as a Content Strategist (note title case) for Verizon Telecommunications, basically doing much of what I’d been doing for the past 12 years (but making more money).

Then along came “Content Marketing” and people calling themselves “Content Marketers,” aided and abetted by the rise of social media, which unsettled many a newly anointed “Content Strategist,” including me, until I figured out that “content marketing” was basically all about creating good content, publishing and sharing it and thus attracting more attention to a business or organization or self or what-have-you, which again was a big part of what I was already doing.

And then I knew (as someone says somewhere in the Bible)… that like all the many new Web design and development roles and job titles that have come down the pike over the years, “content marketing” is just another healthy symptom of the explosive growth of the Internet and Web and social media and networks and the resulting constant demand for new specialties and specialists to get a lot more new, different work done.  And by now I’ve learned to just keep doing my Web content whatchamacallit thing and if anyone asks me what that is, just describe it to them so they can understand it as much as they need to–and let the job titles fall where they may. 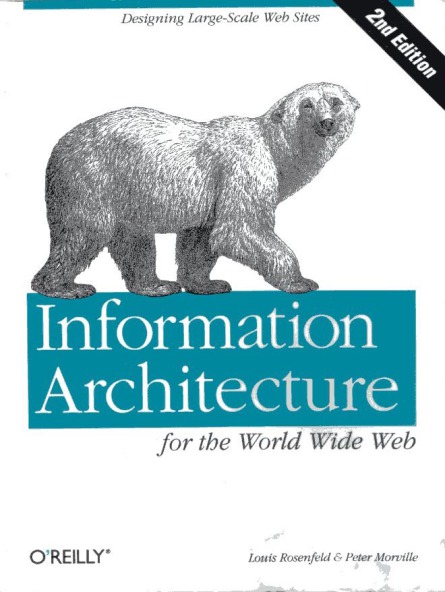 “The Polar Bear Book,” where for many Web IA’s (erstwhile and otherwise) it all began.