Once upon a time, in a land far, far away in cyberspace, there lived an email list for internet travelers searching for the meaning of “information architecture.” I remember it well–especially the thrilling chirp, buzz ‘n rattle of my modem dialing in and that one dude (or was it a dudette?) who alternately bedeviled or captured or led or derailed almost every thread struggling to weave its way through our feverish little minds. S/he never identified him/herself and we never figured out who s/he was, but s/he definitely dominated the discussions despite our occasional attempts to shame or out or ignore him/her. So that’s one kind of troll–the arrogant show-offs and con men. Think Donald Trump. 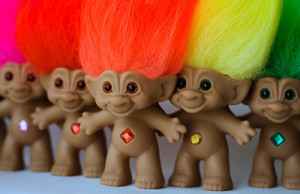 Then there are the pranksters who just want everyone to lighten up a bit, have some FUN. The internet’s response to the British government’s recent public poll on the name for a new government research ship is an good example of that.

And then, of course, there are the Bad Trolls, the ones out to do damage, the ones you have to  deal with or, better yet, avoid to begin with. Here’s an excellent, quick primer on doing just that and handling ego-maniacs and funsters, too: http://www.pr-media-blog.co.uk/5-ways-to-beat-the-trolls/.